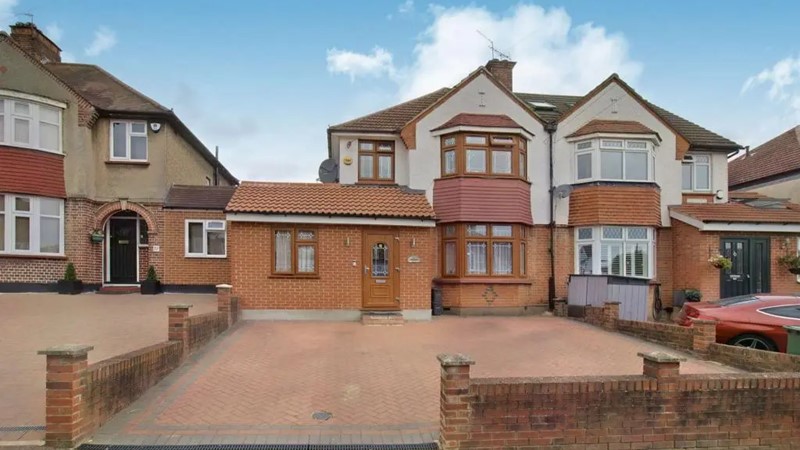 With its glorious natural scenery, warm climate, welcoming culture and low cost of living, The UK is quickly gaining a reputation as one of the most desirable places across the world to live or visit. On offer here is a chance to make a smart financial investment into this magnificent part of the world.

This is an amazing opportunity to purchase a truly stunning sought after family home built originally as a 'show house' in the 1930's which makes it proudly stand out from the rest with higher ceilings and broader rooms.

This semi detached property is very well presented and tastefully modernised by the current owner that has been maintained to a very high standard throughout with four bedrooms, two bathrooms/three WCs with generous proportions and plenty of potential to extend. The property is for sale with no upper chain.

The entrance to the home opens to a porch, that opens into a spacious entrance hall with original wood flooring, under stairs storage and most impressively, access to a fully equipped Studio apartment on the ground floor connected to the home with a an exclusive entrance, which can also be utilised as a separate stand alone room. It contains a fully fitted Kitchen and bathroom. This apartment was formerly an adjoining garage which was converted to a spacious Studio apartment / annexe, allowing it to give the option for it to be a part of the house or separate living area. With a 90 foot rear garden, there is a lot of scope for extension to the rear and above the Studio apartment. The spacious boarded up loft currently provides generous storage space, but can also be converted into an additional room in the future. The property is fully double glazed with gas central heating and underfloor heating in the magnificently tiled kitchen along with an intruder alarm.

The property comprises of a; spacious original wood flooring entrance hallway, a separate adjoining studio apartment, a large through lounge/dining area which opens onto the rear garden, extended kitchen/breakfast area, with a range of fitted wall and base units. To the first floor there are three bedrooms, with fully fitted wardrobes in each room. A spacious bathroom with shower cubicle and separate WC makes up the rest of the upper floor and easy to access to a very large loft space with a fitted ladder.

At the rear, there is a 90 foot west facing garden with a large patio area and laid lawn. The front garden is fully paved to provide off street parking for 4 cars.

Cannon lane is a very popular location, being within the catchment area for the sought after schools in the vicinity, namely Cannon Lane and West Lodge Schools, as well as Pinner and Nower Hill High Schools. For Commuters, there is easy access to Metropolitan and Piccadilly line stations only a short walk or drive away.

Located within a residential area on the outer fringes of north-west London, Pinner has retained much of its ancient charm, particularly in the original village centre, despite its proximity to the capital.

With its church and delightful mock-Tudor buildings, Pinner is a picturesque place for a stroll and there are some lovely places to eat along the High Street and some charming gift shops too.

Considered the more affluent side of the London Borough of Harrow, Pinner has a strong sense of community, with four key events each year. Celebrations for St George's Day in April, Pinner Fair in May, the Pinner Village Show in Pinner Memorial Park on the second Saturday in September and Pinner Pantomime Evening, which takes place on the last Thursday of each November.

Pinner has much to offer the active leisure seeker. The David Lloyd Club in Northwood and Highgrove Pool & Fitness Centre are within close proximity, both offering first-class leisure facilities and expert coaches. There is also a good variety of other sporting and activity venues including football, tennis, and cricket. For the golf enthusiasts, Pinner is home to Pinner Hill and Grims Dyke Golf Clubs.

Numerous restaurants, bars, and pubs offer a diverse choice of cuisines and social entertainment. For those with a penchant for the cosmopolitan nightlife, London's West End is just half an hour away on the tube and there are excellent transport links to Harrow, Ruislip, and Watford.

Middlesex is an area in England, mostly covered by Greater London. It is one of the 39 historical counties of England. It includes the City of London, which was self-governing from the thirteenth century. London's northwestern suburbs steadily covered large parts of Middlesex, especially following the coming of the railways.

The administrative and historic boundaries around Middlesex diverged very early on, with the recognition of the City of London as an independent county borough.

In 1888 much of the area became part of the County of London - the present-day boroughs of Camden, Hackney, Hammersmith and Fulham, Kensington and Chelsea, Islington, Tower Hamlets and Westminster were removed.

During the next few decades the county became almost entirely urbanised by suburbs of London. Towards the end of the period, many of the boroughs in the area were demanding independence from Middlesex County Council as county boroughs, which if granted would have left Middlesex County Council controlling an area with three distinct and unconnected fragments - in the west, the south-east and the north of the county.

Instead, in 1965, nearly all the remainder of Middlesex was subsumed by the new Greater London except the Potters Bar district; which was ceded to Hertfordshire, and the district of Spelthorne, which were ceded to Surrey. The greater part went to form the new London boroughs of Brent, Ealing, Enfield, Haringey, Harrow, Hillingdon, and Hounslow.

Middlesex is still used as a placename, and exists in the name of such organisations as the Middlesex County Cricket Club or Middlesex University. Royal Mail guidelines now leave the use on letters of the historic county, administrative county, or no county at all up to the personal preference of the addresser, and Middlesex is consequently commonly found on addresses outside the London postal districts (and sometimes, even within). From an organisational point of view the Royal Mail does however recognise the existance of an area called Middlesex as one of the Postal counties of England but confusingly it is not identical to the historic county boundaries - not only have large sections formed part of the London postal district but elsewhere the borders occasionally follow a different course, such as the village of Denham which is in both the traditional and administrative county of Buckinghamshire but in the postal county of Middlesex.

* Massive potential in the rental market with guaranteed returns

* Close to essential amenities like such as supermarkets and pharmacies

* Close to many excellent bars and restaurants

* Many excellent sports facilities, fishing, walking and cycling areas nearby